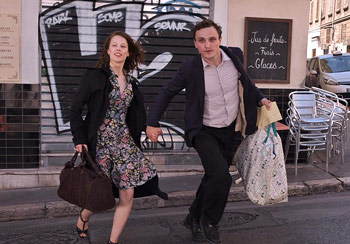 A young man fleeing the camps in Nazi Germany finds himself in possession of papers that will allow him to go to Mexico. All he needs is to impersonate the dead man. His efforts take him to Marseille where he meets the man's wife and a convoluted tale unfolds. Intense and engaging, we are hooked form the beginning. Excellent acting. The director weaves his old war-time story with modern cars and buildings in a subtle expression of how the past overlays the present. 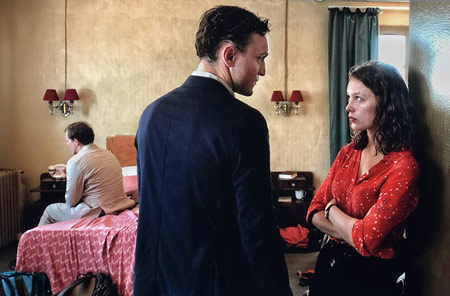 Christian Petzold's latest Transit has an interesting set-up. Rather than opt for a sweeping wartime drama - the film is based on a 1942 novel, written in exile by Anna Seghers - the director of Phoenix and the previous Barbara, chooses to set his latest film in contemporary France, something that you initially struggle to get your head around. However, as the narrative progresses, albeit extremely slowly, the film gradually wins you over as it gradually leads up to its clever climax.

The source material was essentially a Holocaust drama about a German concentration camp survivor who is attempting to escape to America via Nazi occupied France. Here, we focus upon Franz Rogowski's Georg, a German national who has managed to get his hands on some papers belonging to a communist writer named Weidel, who has seemingly committed suicide out of fear of persecution in his hotel room in the 'occupied' city of Paris. The papers include two letters from Weidel's wife, and the Mexican Embassy's assurance of a visa. Georg boards a train and heads to Marseille, his aim to secure safe passage to Mexico after getting the papers stamped at said Embassy in the city, one which is still to be taken by the regime.

After arriving in town, Georg befriends a young boy named Driss, the son of fallen comrade Heinz, who died whilst trying to flee. Then there's the mysterious Marie, who Georg soon falls for, but there's more her to her than it first seems, the attractive, well-dressed woman's movements constantly overlapping with his during his stay. 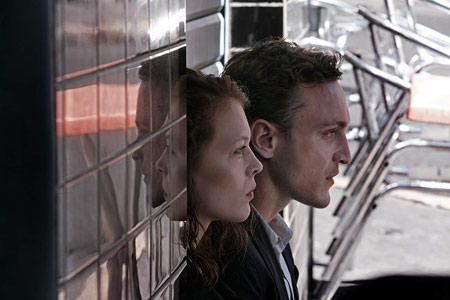 I perhaps got a lot more out of Transit than most, but it is obviously important to buy into the initial set-up for it to work. Despite a tight, 100-minute running time, the film certainly takes its time in leading you to the more interesting second half, the storyline being drip-fed to you, eventually making sense amongst the chaos. There's a lot going on, and while it is very slow-burning, the pay-off is worth the wait if you're willing to stick with it.

Rogowski, a rising star from Germany who you may have seen in Sebastian Schipper's brilliant one-take wonder Victoria back in 2015, is clearly one of the films best assets, easily carrying the movie in a hollowed, haunting performance. Paula Beer is also magnetic as the alluring Marie, who holds the key to the story's unsurprising, though not unwelcome conclusion.

There's a lot to take away from the film, and Petzold's resourceful redirection of the narrative to the modern-day setting is simple and urgent in terms of today's political climate, while also adding extra layers to the overall film.

Transit is a film that lingers in the mind well after the credits roll, a worthy addition to Petzold's already impressive cinematic resume.